Development of continental and regional infrastructure is crucial for long term transformation. Inadequate access to infrastructure negatively impact on economic performance. It has been observed that poor infrastructure in Africa cuts economic growth by 2 per cent every year and reduces productivity by as much as 40 per cent. In the past, the infrastructural development orientation was meant to connect the hinterland to the coastal ports. This was intentional method to ensure access of the hinterland to collect raw materials to feed the industrial growth in the western world. This hinterland-metropolitan linkage was the core of economic underdevelopment of Africa. Western Europe and Africa had a relationship which ensured the transfer of wealth from Africa to Europe vide hinterland-metropolitan transport orientation. The transfer of resources from Africa was possible after trade became truly international. The developed and underdeveloped parts of the present inequality in the world have been in continuous contact four and a half centuries.

The contention here is that over that period Africa helped to develop Western Europe in the same proportion as Western Europe helped to underdevelop Africa (Walter Rodney 1973). This has to be addressed. The tenet of AU Agenda 2063 is to address this imbalance by re-orientation of the infrastructural development compass to point at connecting the economic development nodes in the continent. The connectivity has to ensure enhanced networking of the development economic zones. The efforts to re-orient the infrastructural development compass will not only be as a vehicle for physical integration in the continent, but also as panacea for competitiveness of the different growth poles in Africa.

Deficient infrastructure in today’s Africa has been found to worsen the poor accessibility to essential infrastructure. This leads to depressed growth and productivity. For instance, the road access rate is only 34%, compared with 50% in other parts of the developing world, and transport costs are higher by up to 100%. Only 30% of the population has access to electricity, compared to 70–90% in other parts of the developing world.

Water resources are underdeveloped leading to under-utilization of economic potential. The continent has the lowest water withdrawal per capita in the world (about 170 cubic meters) — owing to hydrological variability, underdeveloped water infrastructure, and inefficient water resources management. East Asia and the Pacific use about three times the water per person; North America, Europe, and even the water-scarce Middle East withdraw more than four times as much (Africa Infrastructure Knowledge, AfDB 2020) Low usage is the common phenomenal in all the major water-using sectors. Africa’s agriculture remains almost entirely rain fed, with less than 10 percent of cultivated land equipped for irrigation. Despite chronic shortages and the high costs of power across Africa, less than 10 percent of the region’s low-cost hydropower potential has been exploited. Notwithstanding the Millennium Development Goals, less than 60 percent of Africa’s population has access to drinking water.

Connecting Africa and the World

The goal is to achieve an inter-connected continent whose infrastructure is integrated and has cross-continental reach with the rest of the world. The ultimate aim of the inter-connected continent is to enhance global value chain. The continent is to be connected from within and to the rest of the World. This is to be amplified with reliable, efficient inter-continental economic corridor connectivity, ICT penetration, efficient continental power pool and increased broadband accessibility.

The efficiency in the international shipping connections complimented with efficient land transport system will expand trade volume and wealth creation for the continent. The corridor routes will ultimately provide “land bridges” connecting African nation states and also the rest of the world to boost the trade network. The Great Equatorial Land Bridge is a case in point. This was conceived to link the Indian and Atlantic oceans along the equator from the Eastern side of Africa’s port of Lamu in Kenya, to West Africa in Doula Cameroon. The Land Bridge will cut across the middle of Africa by high speed road and rail network, a fiber optic cable and an oil pipeline starting from Lamu at the Indian Ocean in Kenya through Juba in South Sudan, Bangui in Central Africa Republic and finally link with the Atlantic Ocean in Cameroon, through Yaoundé and Doula in Cameroon. 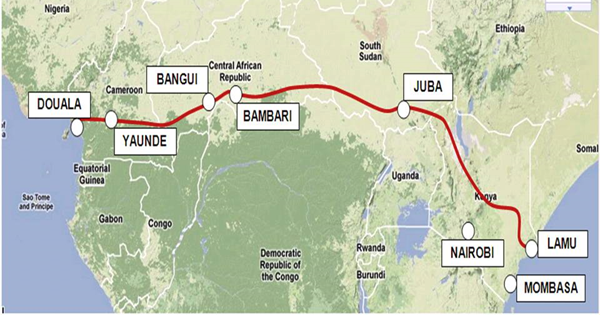 The Great Equatorial Land Bridge (Source: 2020–2022 Africa Updates Inc. 2020–2022) In considering the need for re-orientation of the infrastructural development compass, the essence in the deficit of different categories of both economic and social infrastructure has to be factored. The infrastructure deficit is particularly marked with respect to power generation and access to electricity. Relative deficits are also evidenced with regard to paved roads connecting potential development parks and rural economies, fixed telecoms and social infrastructure. In term of telecommunication, the aspect of ICT penetrations has to be stressed in light of the potential of Fourth Industrial Revolution in Africa. Africa has witnessed significant growth in Information and Communications Technology (ICT) since the start of the millennium, particularly in mobile telephony. But while mobile phone penetration in Africa now stands at over 60%, the continent lags well behind other developing regions in internet access and usage (.www.icafrica.org). These deficits tends to escalate negative impact on African competitiveness, as they hold back harnessing of the emerging development opportunities. 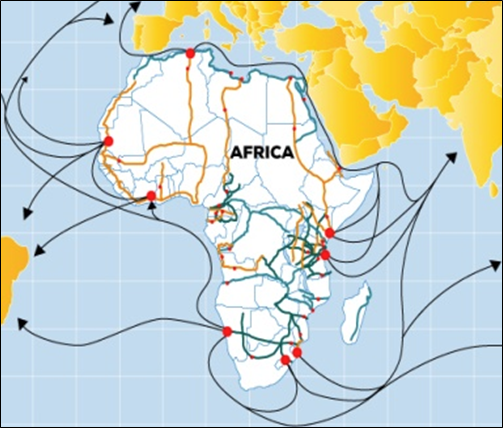 Bridging of African growth poles with network of infrastructure (roads, railways, air transport and waterway, figure above) is mandatory objective for transformation. The cross-continental networks will play key role in the trade expansion agenda. Both the Action Plan on Boosting Intra-Africa Trade (BIAT) and the establishment of African Continental Free Trade Area (ACFTA) stress the need for transportation network that enhances intra-continental mobility for labour, capital and services. The development of regional infrastructural network, spear-headed by economic corridors provides impetus to address issues of wealth creation and social dynamics for local economic development. The economic corridors improve the connections between different economic zones and identified growth poles in the continent. The network will increase the access to markets for manufactures, farmers and potential investors by creating more opportunities for them to become part of the continental, regional and national, economies. These will then lead to improved economic gains and enhancement of nation state economies and strengthen economic reforms within the African continent.